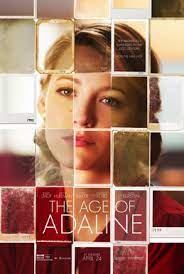 “The Age of Adaline”, a 2015 film directed by Lee Toland Krieger with the screenplay by J. Mills Goodloe and Salvador Paskowitz, was recorded in the USA and Canada. It is a fantasy romance movie. The main character is Adaline Bowman, whose body has stopped aging. I decided to watch this film after hearing many good reviews from my friends.

At the beginning of the twentieth century and after surviving a car crash, Adaline stops aging. She has to change her identity and place of living constantly, so she can live peacefully. She can see how her close ones age. But then she meets a stubborn man who wants to create a relationship despite knowing that she is against it. When time passes, she realises that the man has some similarities to her last and biggest love.

I could feel the emotions of the actors, and the action was pretty interesting. Blake Lively as Adeline Bowman was amazing. I really enjoyed the promotional song sung by Lana del Rey, but sadly, the said song didn’t make it to the movie itself. But even without the promotional song, the soundtrack was really enjoyable and it helped with associating with the feeling of the characters in the film.

Watching this film was a really fun experience, and I’m sure that I’ll watch this movie again a couple of times in the future. I recommend this film to every fan of romance and unconventional stories. In my opinion it’s worth focusing on it so you can feel and understand the emotions and thoughts of the main character.